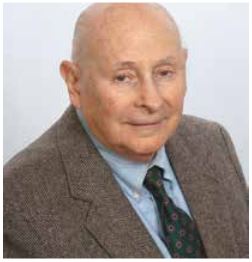 Dr. Samuel Blumenfeld was a giant among men – a true American hero – and he will be missed terribly. He went home this week, peacefully, to be with God.

We collaborated for over a year on the phone and by email on our new book, “Crimes of the Educators.” I can only but thank the Lord that I was able to travel to Boston last week to meet him personally for the first time, and that he waited long enough for me to get there.

I wouldn’t have traded those moments for the world. If you had known Sam, you would understand why.

Sam truly was a great American and a most wonderful person – the type of selfless man whose only concern was helping others. It is rare indeed to even meet such a man, much less have the opportunity to work with him, get to know him and call him a friend. I cannot express in words how blessed I was to have Sam come into my life and to bask in his wisdom and courage.

The great American educator and poet E. Merrill Root wrote: “The hero, in all great ages, among all great peoples, has been the champion of good against evil, of truth against falsehood, of beauty against ugliness.”

Those words are a perfect description of Sam. He is a real hero of our age, an endangered species.

He was a pioneer in the field of education and uncovering the truth behind it. Many researchers have stood on his shoulders.

“It is easier to believe a credible lie than an incredible truth,” Sam would say. He was absolutely right. But even still, he stuck with proclaiming the incredible truth until the end.

As I sat there in his room with him just days before he passed on, all he could think about was making sure that American children would learn to read, and that the truth he discovered so many decades ago – that government education was dumbing down children and destroying them mentally and spiritually – would get out.

He wanted more than anything to rescue as many children as possible from illiteracy, ignorance and wickedness.

That will be his legacy. And I, for one, will do everything in my power to make sure his legacy of greatness lives on.

After spending some time with Sam, I was blessed to have the opportunity to attend and give a speech at a luncheon held in his honor. Hearing the stories of his friends – how he influenced them, how he brought them joy, how he gave them courage, how he made them smile and laugh, how his work taught their children to read – was wonderful beyond description.

Losing him is a major loss indeed – not just for me, his co-author and friend, but for his family, his many loving friends, his admirers and for many more.

It is also a loss for millions of Americans who have benefited from his tireless efforts without ever knowing his name. It’s a loss for homeschooling, for our nation, for real education, for reading.

Even though the world at large may not know it, Sam’s passing is a great loss for us all.

At the luncheon, Boston radio host Chuck Morse, one of Sam’s dearest friends in the world, called him the “godfather of homeschooling.” He said words could never describe what Sam meant to him.

The same is true for me: Mere words could not convey the impact Sam has had on my thinking and on my life.

Sam touched so many lives in his 89 years on this Earth. Over the last month alone, I’ve spoken to more people than I can count whose lives were dramatically impacted by this great patriot.

Countless more may never know his name, but have been blessed by his work nonetheless. We all owe a debt of gratitude to him. He could have done anything – he could have sold out and become rich and famous by siding with a credible lie. But he didn’t. The truth, incredible as it is, was more important to him.

“For what does it profit a man to gain the whole world and forfeit his soul?” Christ asks in Mark. Sam understood that well, and lived it.

His sense of humor was epic, too. So many times he would say something that would literally leave me laughing out loud – he simply told things as they were.

However, Sam’s effort to expose the truth as it is went beyond merely proclaiming it, in defiance of all “authority” and legions of Ph.D.’d “experts.” His legacy also includes, among so much else, bequeathing to us the tools to do something about it for ourselves.

From his book “How to Start Your Own Private School: And Why You Need One,” to “How to Tutor,” and his “Alpha-Phonics” book to teach proper reading to children, Sam has given parents and educators everything they need to really educate children and thereby save our republic and our liberties, and so much more.

Before leaving for Boston, my oldest son, 5, asked me to thank Sam for creating “Alpha-Phonics” and thereby teaching him to read in an easy, common-sense way that works. I did thank Sam on his behalf, of course, but the words “thank you” didn’t feel like enough.

In perhaps our final, long, serious conversation, just a few weeks ago, Sam and I talked by phone about the history of education as he helped me prepare for a speech the next day.

His insights, his wisdom and the depth of his knowledge on education were unsurpassed. I vowed right then to read every book he ever wrote, and, thanks to the generosity of the Samuel L. Blumenfeld Literacy Foundation, I now have many more of those priceless treasures to study and cherish.

In our work together, Sam would often reminisce on what school was like in his day. One of his fondest memories was how the principal, at every assembly, would read Psalm 23 to the students:

“The Lord is my shepherd; I shall not want. He makes me lie down in green pastures. He leads me beside still waters. He restores my soul. He leads me in paths of righteousness for his name’s sake. Even though I walk through the valley of the shadow of death, I will fear no evil, for you are with me; your rod and your staff, they comfort me. You prepare a table before me in the presence of my enemies; you anoint my head with oil; my cup overflows. Surely goodness and mercy shall follow me all the days of my life, and I shall dwell in the house of the Lord forever.”

One day after his 89th birthday, Sam left this fallen world – a world that, for the most part, did not recognize his genius or his heroism; a world that, in fact, hates true heroes. He went home to go be with the Lord.

But not before accomplishing his mission and blessing all of us with his wisdom, his courage, his faith, his hope and his love.

I know he is in a better place today. Rest in peace, Sam.