Read Below:
Written by William Jasper in the New American Magazine on Thursday June 4, 2015 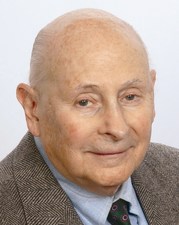 Millions of people who can read today owe an enormous debt of gratitude to Samuel L. Blumenfeld (shown), America’s foremost apostle of phonics over the past half century, who died on June 1, one day after his 89th birthday. I was privileged to know him, as a friend and colleague, for more than 30 years.

I first became acquainted with Sam Blumenfeld’s writings in the early 1970s. I was a college student at the time and had switched my course of study from pre-veterinary medicine to psychology and education. The “reading controversy” that had been launched in 1955 with the publication of Dr. Rudolph Flesch’s best-seller, Why Johnny Can’t Read and What You Can Do About It, was back in full swing, following a period of relative quiescence. Sam’s book The New Illiterates (1973) rekindled the debate, exposing the ludicrous basis of the destructive look-say methodology that was mentally crippling millions of children, and forcefully putting forward the case for restoring intensive phonics in the reading programs of our nation’s schools. Having, myself, been taught to read by the phonics method, and being well aware of the devastating (and growing) illiteracy plague, Blumenfeld’s New Illiterates seemed to me to be spot-on. This led me to his other early books, How to Start Your Own Private School (1972) and How to Tutor (1973). These and his many other books, articles (for this magazine and others), audio tapes and CDs, videotapes and DVDs, online videos, radio and television appearances, and global speaking tours have rightfully earned Sam Blumenfeld the respectful sobriquets “godfather of the phonics movement,” "godfather of the homeschool movement,” and "godfather of the private school movement.”


Samuel Blumenfeld was born and raised in New York City. He was educated in New York’s public schools and graduated from the City College of New York. He studied for a year at the University of Paris-Sorbonne and was fluent in French. During World War II, Sam enlisted in the U.S. Army and was assigned to an artillery unit. He saw combat in the Po Valley of Italy.

Following the war, Sam worked in New York City as a magazine and book editor for major publishers such as Viking Press and Grosset & Dunlap, and was founder and president of his own publishing house, Coleridge Press. After reading Dr. Flesch’s Why Johnny Can’t Read in 1959, he got active in the reading debate and became a member of the National Advisory Council of the Reading Reform Foundation, the leading national organized effort to restore phonics to reading instruction. He was longtime chairman of the Massachusetts branch of the Reading Reform Foundation.

Sam was a staunch anti-communist, and in 1959 founded the American Committee for France and Algeria to expose the Soviet communist hand at work in the Algerian revolution, which was being much romanticized by the American press and materially helped by our State Department. In 1961, as the United Nations prepared to wage war in the Congo, supporting the communist forces against the independent republic of Katanga, Sam founded the American Friends of Katanga to support the pro-American forces of Moise Tshombe.

In the mid-1960s — with Soviet communism advancing around the globe and domestic communists setting America ablaze — he moved from New York City to Boston, to work with, and for, The John Birch Society, which was then headquartered in Belmont, a Boston suburb. Founded by anti-communist businessman/historian/philosopher Robert Welch, the society was being smeared by the liberal-left media and political machines.

Sam, a small, soft-spoken, gentle man, showed his steel, wading into the fray. He became a writer and editor for the society’s magazines, American Opinion and The Review of the News, and editor of its book-publishing house, Western Islands. In 1966, he was a founder of the Jewish Society of Americanists (JSA), along with noted author Alan Stang and other Jewish members of the Birch Society, including Hungarian immigrant Georgia Gabor, whose autobiography, My Destiny: Survivor of the Holocaust  (1981), details her harrowing experience and the killing of her entire family by the Nazis. It was my good fortune to befriend Gabor, who, for more than two decades, was a mathematics teacher in San Marino, California. Besides both being Jewish survivors of World War II and fervent freedom fighters against totalitarianism and subversion, Georgia and Sam shared a love of education and a determination to expose and oppose the forces that are infecting and destroying our education system and our society. It was my delight to host both of these outstanding patriots together at a number of formal and informal dinners, luncheons, and other events during Sam’s speaking tours in California in the 1980s and to hear their conversations and recollections of their JSA/JBS experiences of the previous decades.

Sam’s longtime friend and colleague Hal Shurtleff told me recently that in going through the unpublished manuscripts and papers that Blumenfeld had bequeathed to him, he found many interesting poems, letters, novels, and newsletters that Sam had written. Among them was an interview Sam had conducted in the mid-1960s with Moise Tshombe, while the Katangese president, a courageous, anti-communist Christian, was in exile. The Jewish-American journalist/activist and the UN-ousted African politician conducted the interview in French — the language they mutually agreed would serve them best — in Madrid, Spain!

Sam Blumenfeld was a first-rate historical researcher, as his articles and books attest. He spent enormous amounts of time digging through the stacks and files of the Harvard University Library, the Boston Public Library, New York Public Library, Library of Congress, and other research archives. This scholarly sleuthing ability served him especially well for his 1981 path-breaking book, Is Public Education Necessary?, which remains a critically important book today — more than a quarter century after its publication — for understanding the destructive course of American education in the 20th century. Piece by piece, Blumenfeld laid out the evidence, showing the gradual takeover and subversion of education in the late 1800s by hardcore atheists, socialists, and communists, all intent on government control of education to remake society by remaking the child. He named names (Robert Owen, Frances Wright, Horace Mann, et al.) and provided historical documents with their own quotes showing their plans to replace the influence of parents, family, and religion with devotion to the State.

Sam followed up with additional breakthrough research along these lines with his 1984 book, NEA: Trojan Horse in American Education, exposing the National Education Association teachers union. That earned him the ire of the militant teachers’ unions and their media allies, which he took as a badge of honor.

His many other books on education include Alpha-Phonics: A Primer For Beginning Readers, The Victims of Dick and Jane, The Whole Language/Obe Fraud: The Shocking Story of How America Is Being Dumbed Down by Its Own Education System,Homeschooling: A Parents Guide to Teaching Children, Revolution Via Education, Blumenfeld Oral Reading Assessment, andPhonics for Success. For a decade (1986-1996), he published the monthly Blumenfeld Education Letter, which delivered many cutting-edge reports and unmatched analysis on education matters.

Despite his sedentary, scholarly lifestyle and diminutive physical stature, Sam kept up a remarkably robust speaking and writing schedule. Over the years, his speeches and lectures took him to every state in the United States, as well as Canada, Australia, New Zealand, and England. Many of his speaker tours were carried out under the auspices of the American Opinion Speakers Bureau of The John Birch Society. Virtually up unto the end, he remained active researching, writing, and speaking.

During the last year of his life, Sam began co-hosting a radio show, Literacy Matters, with his longtime friend Bill McNally, on WSMN A.M. Radio in Nashua, New Hampshire. He also labored during those last months with co-author Alex Newman to complete Crimes of the Educators: How Utopians Are Using Government Schools to Destroy America's Children, which may be his most important work. (See our review here.)

Throughout a long and productive life, Sam Blumenfeld displayed an enduring, heroic passion for truth and freedom. His words, his works, his example have informed and inspired several generations of patriots now actively engaged in the culture wars. However, as heated as the battles became, even his opponents and critics must concede that he remained always a civil and decent man, ever kind and courteous, never descending to rancor and name-calling, even when subjected to the same. He was a fierce warrior with a gentle soul, a giant residing in a small frame. His contributions toward restoring our culture and our civilization are immense. His passing is our loss, but his life’s work remains with us to enlighten our path and strengthen our courage for the upward climb.

Articles from The New American by Samuel Blumenfeld:

The Legacy of Rudolf Flesch

The Glory of the Alphabet

The Push for Birth to Age Five Education

Re-printed by Permission...Here's a link to  "The Original Article at The New American"